FIFA Budget Breakdown: How Does the Football Organization Make Money?

Football is one of the favorite games and is played by around 240 million people from more than 200 countries regularly. Football has by far the largest fan following and that is why football has the highest television viewers worldwide.

In this article, we’re going to see the budget breakdown of FIFA: the governing body of association football worldwide and how this organization makes the money.

Headquartered in Zurich, Switzerland FIFA was founded in 1904 to supervise the international competitions of association football.

FIFA has six Confederations (AFC, CAF, Concacaf, CONMEBOL, OFC, and UEFA) and there are currently 211 national associations members of FIFA.

FIFA is in charge of running world football and of organizing the big football tournaments around the world. The most famous tournament organized is the FIFA World Cup every four years.

Although FIFA is the governing body of football worldwide it alone does not set the rules of Football games. The International Football Association Board set the rule of the game however FIFA is a member of this association and that is why FIFA applies the rules across all its competitions.

For FIFA the main stream of revenue comes from its tournaments sponsorships and other resources. In 2018, World Cup FIFA has revenue over US $4.6 billion with a net profit of US $1.2 billion and FIFA has a cash reserve of over  US$2.7 billion.

Let’s see how this organization manages to make the money and its budget breakdown in later sections.

What is FIFA responsible for

According to the official website, FIFA aims to “promote the game of football, protect its integrity, and bring the game to all.”

FIFA is responsible for growing the association football internationally and taking efforts to make the game of football accessible to everyone. FIFA also acts as an advocate for the integrity of football and fair gameplay.

What are FIFA’s recent initiatives?

Here are some of the activities and initiatives that FIFA works on.

It is a Child Safeguarding program from FIFA that ensures a safe and healthy environment for the young generation of the football family.

It’s a support program for the development of football games so that it can reach every nation worldwide.

FIFA has a medical committee that looks after the medical services across all FIFA tournaments and also handles medical matters in football. It ensures the health of players.

The objective of this program is to provide football education and technical support. There are subprograms under this program for grassroots, women, boys, and other football categories.

This program is committed to improving the lives of children and young people across the globe.

This program has a commitment towards increasing the opportunities that exist within football for female coaches across the globe.

The FIFA World Cup is not just a tournament or the biggest sports event in the world but it is the biggest source of FIFA’s income for its business revenue.

Total 21 FIFA World Cups have been won by different nations. Brazil has won 5 titles that are the highest won by any country ever followed by German and Italy with four World Cup wins each. Uruguay, France, and Argentina have won two times each. Spain and England have won 1 title each.

Have you ever wondered how this big organization makes and spends its money? What is its revenue model and what are the main streams of income for FIFA?

In this section let’s breakdown the FIFA budget and understand how the biggest football organization in the world makes the money.

How does FIFA make money?

FIFA’s total assets amounted to USD 4,389 million (50% higher than at the end of the previous cycle), with 82% in the form of cash, cash equivalents, and financial assets.

The total assets of FIFA reached USD 4,389 million which is 50 % higher than the previous cycle.

With the end of the FIFA World Cup Russia, it managed to reserve a new record level that is USD 2,745 million.

These are totally jaw-drawing figures. Without arguably FIFA is the world’s richest sports organization and governing body.

Here is the breakdown of FIFA incomes from various sources including the World Cup.

So that is how FIFA makes the money. Now let’s understand how it spends or invests its Money.

How does FIFA spend (invests) the money?

Here is the quick view of the investment or spend of FIFA in numbers. 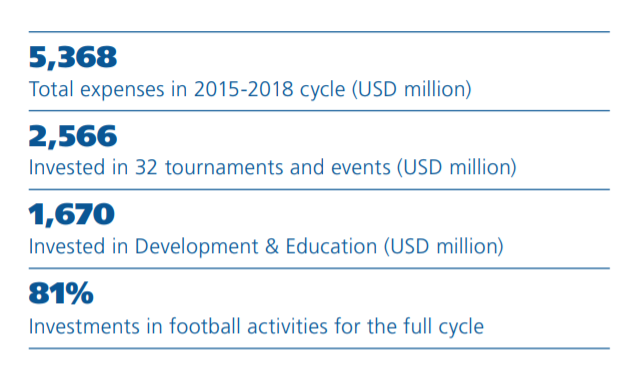 Here is the breakdown of FIFA’s Expenses

How much does FIFA have in reserve?

After the 2018 World Cup FIFA’s reserves reach an unprecedented high.

FIFA has seen solid returns on its investment despite the difficult environment.

The world’s biggest sports organization FIFA makes most of its money from its tournaments and the biggest source of income is television, sponsorships, marketing, and licensing rights for its football tournament like FIFA World Cup.

The infrastructure costs of organizing the World Cup are left up to the organizing country that helps FIFA in keeping its expenses low.

In 2018, FIFA generated more than $4.6 billion in revenue. FIFA has a good amount of capital reserve and a profitable investment portfolio that makes it the world’s richest sports organization.

FIFA invest most of its revenue back into the development of the football game.

‘The Falcon and the Winter Soldier Submitted as Drama, and Not Miniseries, for Emmys — Do we anticipate for Season 2?

The downfall of De Beers from the Diamond Monopoly Industry

Who is Real Madrid’s owner?

Jurgen Klopp: Why I allowed Takumi Minamino to...

Will Memphis Depay finally be a sensible transfer...

Will Lionel Messi’s Barca exit bring out the...

The best Goalkeepers in the Premier League Right...

The Greatest Goalkeepers of all time in football...

Why is no big team buying Adama Traore